Why Not Manston?  Newsletter May 2018 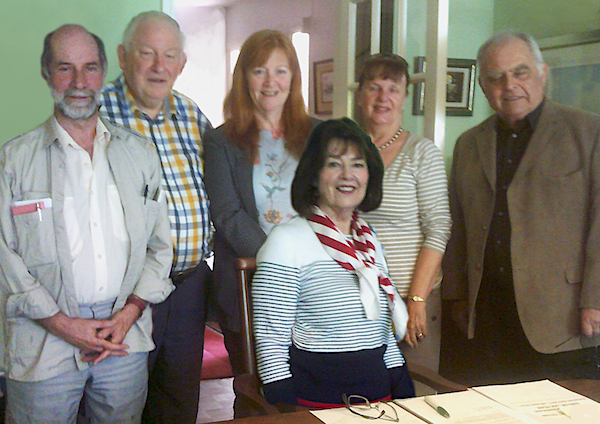 We are happy to announce that WNM has two new officers in post.  Our new Chairman is Angela Sutton.  Angela served 32 years in the RAF, obtaining the rank of Squadron Leader (now retired). Angela lives locally, and has been a member of our group since it was founded. She is third from the left, in the photo above.

Jan Revell (not present for the photo) remains our Hon. Treasurer and Bo Beolens is our Webmaster.

Last month, RiverOak Strategic Partners, (RSP), submitted their very detailed Development Consent Order to the Planning Inspectorate. The planners replied that there were five points on which they would like more information. Unless that information is included in the detailed proposal, they might possibly turn it down. RSP therefore withdrew their proposal, so they could include all the points raised by the Planning Inspectorate. Although this will cause a delay, it is actually a good sign. It shows that the Inspectorate have already been considering the proposals very carefully.

Please find attached to this message the recent statement from RSP regarding the parliamentary briefing which took place at Westminster on 22nd May, to focus on the hi-tech potential for Manston to improve air cargo productivity.

What is a DCO?

Being a supporter of Manston as an Airport, you are of course aware that RiverOak are trying to reopen the airport by means of a Development Consent Order, (DCO).  Many of us know what that means, but some just know the term, but not what it stands for.

If you Google DCO, four definitions come up. The first isDefence Contracts Online, the second was Dynamic Creative Optimisation, the third was Driver Controlled Operation, and, last but not least, the fourth was Dry Clean Only! Not much use to a potential member, if they wonder what we are campaigning for!

We no longer have the Kent on Sunday newspaper, which would have explained a DCO to those living in Kent; and, of course, we still have the greater difficulty of getting our message into the national press. All treat Manston as Kent News only – yet they are happy to discuss Stansted as a “London” Airport.

A DCO application for consent to undertake a Nationally Significant Infrastructure Project (NSIP) is made to the Planning Inspectorate who will consider the application and make a recommendation to the Secretary of State, who will decide on whether development consent should be granted for the proposed scheme.

The company applying for the consent has to make out a good case. They have to be able to show that Manston is viable as an airport, and that they have the money, and the expertise, to run it. RiverOak Strategic Partners can do all three.

Why Not Manston? Committee